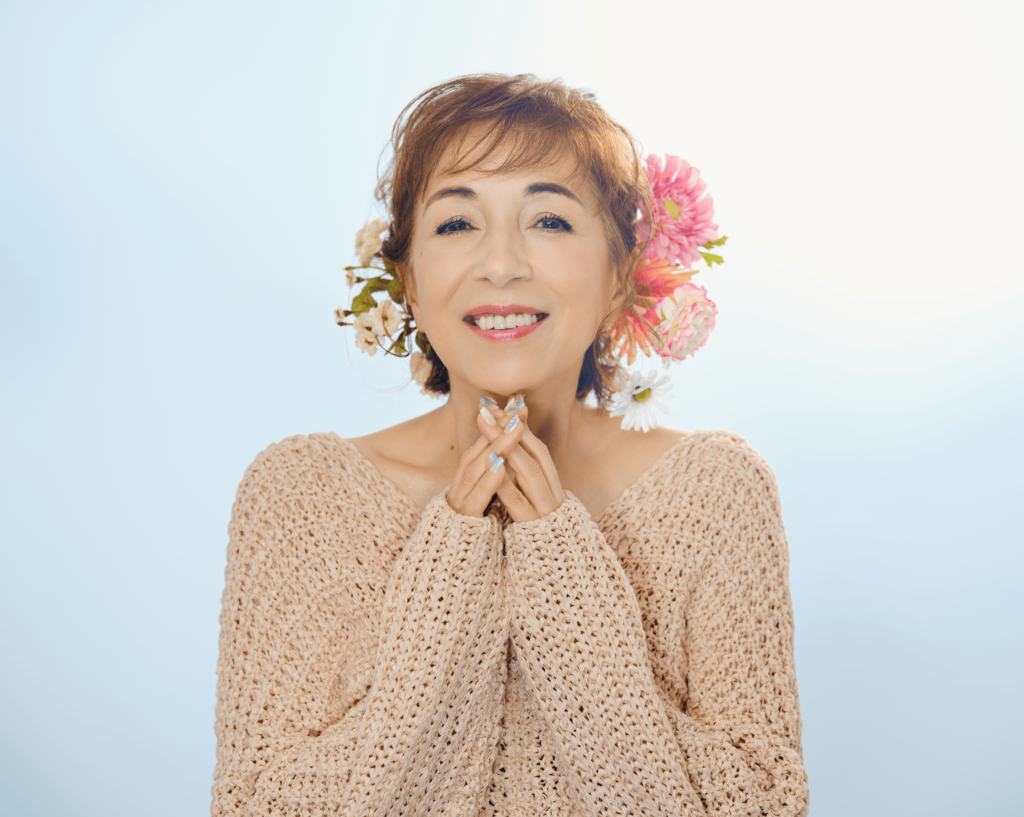 Born in Tokyo to a Japanese mother and Hungarian American father. After finishing her education at Seisen University Department of English language in Tokyo, she started her modeling career and has been featured in various fields of entertaining industry including magazines, TV as s reporter and radio.

In 1982, she made her debut as a singer with a song tied to TV drama. First Album ‘AMORE’, produced by Tsugutoshi Goto with original songs mainly, was released on KING.

She was absolutely fascinated with Julie London and with her uncle’s word “You can sing Jazz regardless of age”, she decided to study with Yasushi Sawada, Japanese jazz vocalist, who was a friend of her uncle.

To aim for more growth, she moved to New York and studied voice and joined adventitiously at Jazz Club.
Upon returning to Japan in 2006, she has released an Album ‘DREAM ’ produced by Norio Maeda which was recorded with leading members such as Eiji Kitamura, Shunzo Ohno and Tadayuki Harada.

In 2009, she has released an Album 『Yesterday When I Was Young』, produced by Makoto Kimata. Album was recorded in Rome with a collaboration with famous artists in Italy such as Alessandro Bravo Trio and Fabrizio Bosso.

The album was known for a good selection and she went on Japan tour with the trio.
2019, 『CAROL』, featuring an up-and- coming young musician and leading figure clarinetist Eiji Kitamura, was recorded live and released from Amazon Records.

Awards,
1993 Won the new vocalist award at the 9th Japan Jazz Vocal Award.The award is given to a person who was most successful and budding singer of the year and she was awarded with her great singing skill, entertaining and generous personality.
2010 Selected as one of the World’s 100 Jazz vocalist to listen to.
2011 Won the First place at the 27th Jazz Vocal Contest.
2013 Collaborated with the Tokyo Symphony Orchestra.
Performing with leading musician of the world today.

～Radio～
She is an FM radio personality for two hour-long music show aired every Saturday on Shonan Beach FM which has been a long-running program over 20 years.

Program will invite various guests every month to Riviera Zushi Marina and hold a live concert where she will organize, host and even sing from time to time.
Invited guests: Junko Onishi, Keiko Lee, Mickey Curtis, Yosuke Yamashita, Chihiro Yamanaka, Naoko Terai, Circus, Yukari Ito, Harvey Thompson, and many other musicians.
She is also working on collaboration with Pulsebeat Media in Detroit.

～Stages～
She has been singing in Japan’s Top-Ranking Live houses, Traditional Jazz clubs in Yokohama, Japan. She will perform at Event, Dinner shows throughout Japan.

～Carol’s Stage～
She has established reputation for her silky voice and sophisticated swinging.
Listeners regardless of age will kindly embraced by her splendid atmosphere stage.
Despite of Corona, she appreciates her happiness performing on the stage to share
the hope through music.

～Private～
She lives in Yokohama with family including 2 Rescued dogs. She enjoys walking with dogs in the neighboring park and port area.
Loves Korean barbeque, Sushi, sweets and desserts.